In this HTML5 melting and boiling simulation, an ice cube is melted into a beaker as a flame is applied. Molecules of water are overlaid onto the image of the ice cube and the image of the water. Once the liquid water reaches the boiling point, it evaporates as steam.

1. As the ice cube melts, the water molecules are freed from their trapped state and can now roam about the glass beaker as a liquid. During this melting process, temperature stays constant at 0 degrees celsius.
2. Once the ice is completely melted, the liquid water molecule can now move faster and faster as heat is applied. This is seen as a rise in temperature.
3. Once the liquid reaches 100 degrees celsius, it no longer rises in temperature. Instead, the water molecules are moving so fast that they leave the container as steam. 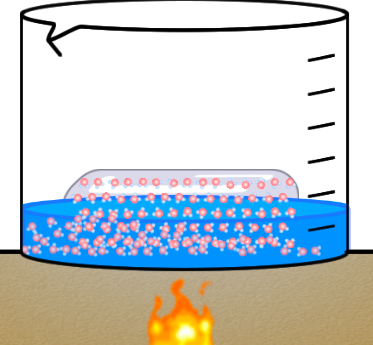