Ball Launched At An Angle 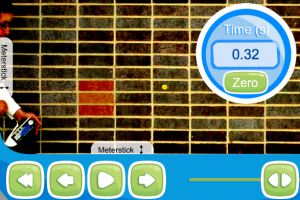 To play a video, tap one of the gray buttons.

In these videos, a ball is shot at various angles and speeds with a launcher.  All videos were shot at 100 frames per second.  These videos include plotting and graphing tools to allow students to rapidly create horizontal and vertical position and velocity plots from the ball’s motion.

Feel free to experiment or to do the suggested activity linked below.