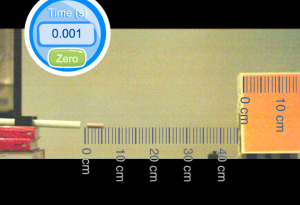 The last few days have been rainy in Chicagoland, so we took advantage of the bad weather by launching our indoor air cannon. We have lovingly blasted all of our Nerf darts into oblivion, so yesterday we decided to launch a AA battery instead. We started small, using an 8-foot section of 1/2 inch PVC pipe as a blowgun. Using nothing more than lung power, we were able to launch the 24 gram battery at 22 meters per second. Although this is impressive, we figured that we could push the limits a little and hook up our pressurized air launcher to the PVC pipe. With the air launcher we were able to launch the battery at significantly higher speeds. We launched the “battery cannon” three times. Each time, the battery was safely “caught” by a box mounted to low-friction rails.

As always, we captured the motion of the battery and the box using the Edgertronic high speed camera. Our first shot was captured at 200 frames per second, but we realized that we would need to go to 1000 frames per second for higher launch speeds. The result is a series of videos that students can use to verify the Law of Conservation of Momentum.

Please note that our experimental setup wasn’t perfect, and the battery did ricochet off of the inside of the box, introducing a small but measurable increase in the speed of the box after the collision. This is a perfect opportunity to discuss imperfectly inelastic collisions.

We hope you enjoy the new videos, and please let us know if you are using them in your classroom.

Also, chemistry and biology teachers, we have found that the camera also works great for fast-moving explosions and insects. Please let us know if there is a potentially interesting phenomenon that you would like to see filmed in slow motion!