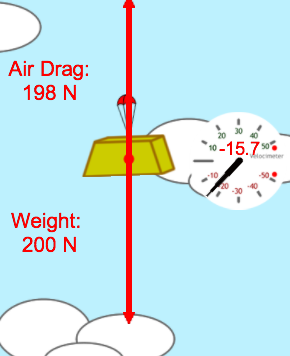 A simulation of air drag encountered during skydiving.

This shows that a heavier object DOES fall faster….not exactly much use for a physics lesson!

When air drag is taken into account heavier objects do fall faster. For example, a 1 square meter parachute with a toy soldier attached will achieve a relatively small terminal velocity. A 1 square meter parachute with an actual human soldier attached will achieve a terminal velocity that is likely to kill the soldier.

We have found air drag to be a great topic in our physics classes. It really does drive home the difference between the ideal model and real life where air drag might be significant!

This simulation is very useful, especially in application to real-life physics, such as a parachutist. Not only does this portray the opposition of aerodynamic drag to net force, but it also presents key concepts such as terminal velocity as well. This helped me very much, thank you.

Great simulation – a previous oen I used relied on Falsh so I’m very happy to find this one. If only it plotted a velocity time graph as it fell….